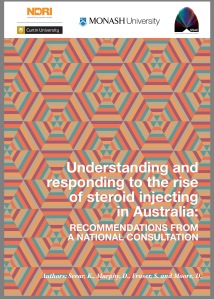 Australia is at risk of increases in HIV and hepatitis C transmission, Australian experts believe, as rates of illicit steroid injecting go up. A newly released report documents concern among alcohol and other drug workers and policy makers that Australia does not know enough about the practice and may fail to prevent new blood-borne virus epidemics among people who inject steroids. The new report details findings from a national consultation on the rise of illicit steroid use in Australia. Led by Dr Kate Seear, the consultation involved interviews with 15 alcohol and other drug experts across Australia. The findings highlight a number of areas of concern. Most importantly, experts believe that Australia is not adequately equipped to deal with the growth in steroid use. Consultation participants point out that we do not know enough about the scale and distribution of steroid use, nor why people appear to be taking up steroids. One participant observed that “the horse has bolted from the stable about 10 years ago, where [use] just really took off”, and that responses were now urgently needed. Other main findings from the consultation include that: