New funding from the Australian Research Council will allow the SSAC team to launch two new major Australian alcohol and other drug research projects in 2017. Totalling almost $1million, the funding will support research on the use of performance and image enhancing drugs in Australia, and the uptake of naloxone, a lifesaving medication that reverses opioid overdose. 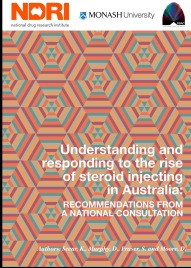 Led by Professor Suzanne Fraser, the first project will investigate the social practices associated with men’s use of performance and image enhancing drugs (PIEDs), to better understand who takes them, when, why and how, and to create new knowledge on the health information needs of men who inject PIEDs. PIED use is increasing in Australia and can be associated with serious health issues, including hepatitis C transmission where injection occurs. Little is known about PIED injecting, and Australia’s harm reduction framework is unprepared to meet the challenges it poses. This project expects to directly inform policy and practice, aiming to help minimise hepatitis C transmission among men who inject PIEDs. In the process the project will illuminate contemporary practices of masculinity through PIED use as they play out in relation to sexuality, ethnicity, age and other issues.

The project builds on preliminary research on PIED use conducted via a health sector consultation. The consultation report was published in 2016.

According to Suzanne Fraser,

We don’t yet know a great deal about men’s use of PIEDs in Australia. Any kind of injecting drug use tends to be hidden because of its association with addiction and negative ideas about drug use per se, and PIED injecting is no different. This project will draw on the team’s expertise in the social and political dynamics of drug use, contemporary reconceptualisations of stigma concepts, and gender theory, to carefully analyse the diverse dataset of in-depth interviews we will collect. The result should be highly detailed new knowledge about this important but very understudied issue.

The second project, also led by Professor Suzanne Fraser, aims to investigate impediments to uptake of ‘take-home’ naloxone in Australia. Take-home naloxone is available both on prescription and over the counter, yet distribution to people at risk of overdose or connected with those at risk is weak. Programs providing take-home naloxone to opioid consumers exist in some Australian cities, but even here uptake remains minimal. The reasons for this are not well understood. This qualitative project will interview opioid consumers, prescribers and pharmacists to better understand the issues surrounding take-home naloxone, and will then produce an online resource on experiences of overdose and the use of take-home naloxone. The aim is to inform those affected by overdose, professionals and the wider Australian community about take-home naloxone, to support distribution of the medication, save lives and protect communities.

Opioid overdose is heavily freighted with stigmatising preconceptions about people who consume opioid drugs such as heroin. Assumptions about addiction, negative perceptions of people who take drugs, and symbolic connections between injecting and deviance, mean the disclosure associated with accessing the medication may be difficult and even marginalising. Those witnessing overdose may also be affected by these assumptions and perceptions, as may service providers otherwise equipped to encourage distribution of this lifesaving medication. Our job in this project is to explore these issues alongside the other concerns and practical obstacles our interview participants raise to find new ways to support the expansion of take-home naloxone in the community.